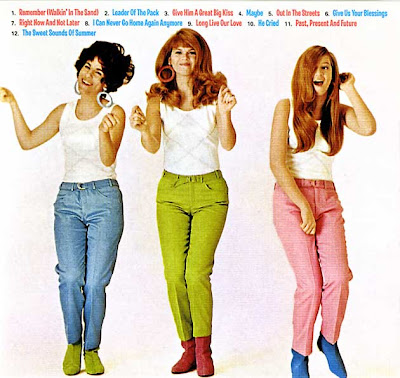 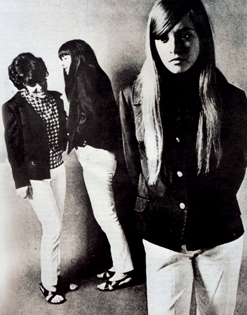 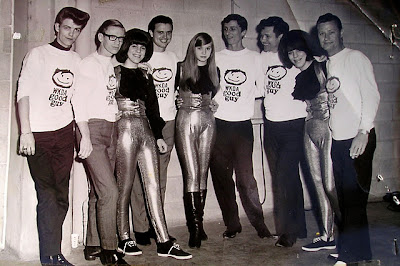 I've recently discovered 1960s 'tough' girl group the Shangri Las, best known probably for the single 'Leader of the Pack'. Not only did lead singer Mary Weiss (she's the blonde one) have a lovely voice (the band were actually a quartet rather than a trio, but Mary's sister Betty rarely toured with the rest of the group and so doesn't appear in many photos) but their songs express so brilliantly adolescent longing and angst, all from a decidedly female perspective. Oh, and the girls had great style too. Youthful, cutesy but a big rough around the edges too.

Here's them performing one of my favourites: 'Out in the Streets.' 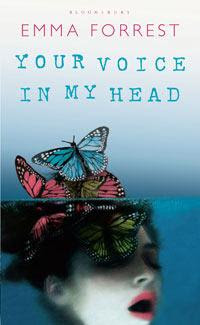 Over the last couple of days, while I've been assessing my year, I've also been assessing my reading year. Books are such an important part of my life - not only do I work in them but I also consume them rabidly - that it would be a sad twelve months indeed if I didn't come across a number of works that had touched me, and at least a couple of books to add to my all time favourites list.
I remember saying to someone at the beginning of this year that I'm not a big memoir person. Too self-indulgent perhaps, or too limited. But as I reflect on my reading year I realise that I've actually read some bloody brilliant memoirs this year. In fact over the years I've read some seriously great memoirs which I would unreservedly recommend to any other readers: The Year of Magical Thinking (Joan Didion), Truth & Beauty (Ann Patchett), Lucky (Alice Sebold), The View from Castle Rock (Alice Munro - part memoir, part history, part fiction) and Borrowed Finery (Paula Fox).
I guess that, because I find novels so expansive and so representative (and because of that so TRUE), they are the books that overwhelmingly make up my top 10, 20 or 50 books of all time. Having said that though, when I look back at 2011 I would be hard pressed not to include these three beautiful memoirs in my ten favourites of this year. 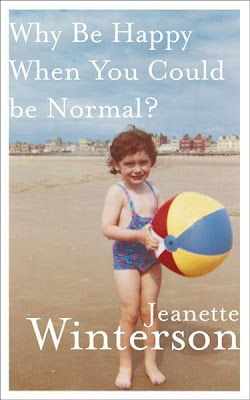 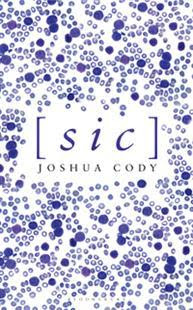 Emma Forrest's memoir Your Voice in My Head focuses, essentially, on the author's relationship with her therapist. Suffering from depressive episodes throughout her young life (and she is still young) this therapist had seemed to be the only person who had really made a dent in Forrest's sadness. But then he died.
Your Voice in My Head is really Forrest's way of writing out her grief and her feelings are so raw and honest and beautifully drawn you can't fail but be moved. There is also a lot in this book about family and familial legacy as well as romantic love (and lust). Oh, and an awful lot about self esteem. There is much in here that any woman who has had her heartbroken could relate to. And haven't we all at one time or another?
Jeanette Winterson is a tremendously talented writer. Her way with prose is sigh inducing, in a majorly good way. There are passages in Why Be Happy When You Could Be Normal? that had me wishing I had a pencil with me so I could do some serious underlining. If you've read Winterson's debut novel Oranges Are Not the Only Fruit then her memoir will definitely intrigue. The first half is basically the true story from which that novel was drawn; the story of a working-class childhood of a bookish little girl adopted by a fiercely religious (and completely mad) woman. If it's possible, the real version of Winterson's mother is even madder than the fictional one. The second half of the novel is Winterson's very affecting story of her search for her birth mother. And finally Joshua Cody, a young 'un on the literary scene - he claims this will be his one and only book - has written a story about mortality and a brush with death. An intellect and musician living the life in New York, in his 30s Cody was diagnosed with an aggressive form of cancer.

This book is such a pastiche; it includes musings on poetry and art interspersed with diary entries from himself and his mother during his stay in hospital, as well as deeply personal remembrances of his father, existential crises, sex, drugs, rock 'n' roll and lots, lots more. The prose style is actually quite pretentious but I kind of loved it. I found it deeply original and honest in its affectation, if that makes sense. I felt, when I read it, that this was REALLY HOW THIS GUY WAS. He was someone I would want to sit down and have a meal with. I actually really hope he writes some more.

And what of fiction, you may say? Well my runner up for my Book of the Year (only including novels I've actually read, mind you) is Malcolm Knox's The Life, an unfortunately little read story about an Australian surf champion from the 60s and 70s battling mental illness. Simply brilliant. And my number one is most definitely Jennifer Egan's Pulitzer Prize winning A Visit From the Goon Squad. What I wouldn't give to write like her.
Posted by Louise at 10:28 PM No comments:

Some new pretty for the weekend ... 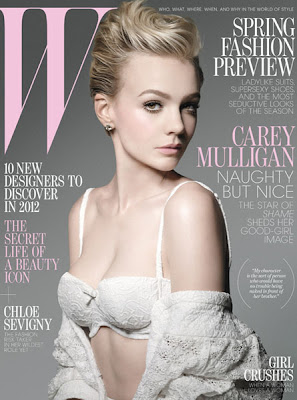 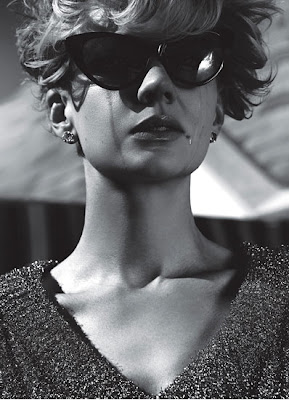 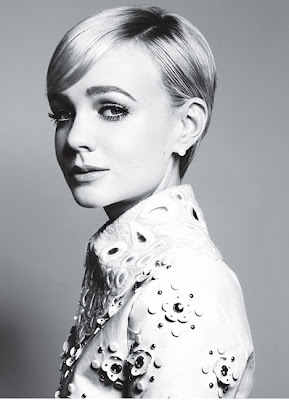 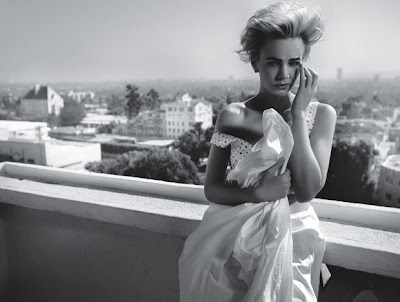 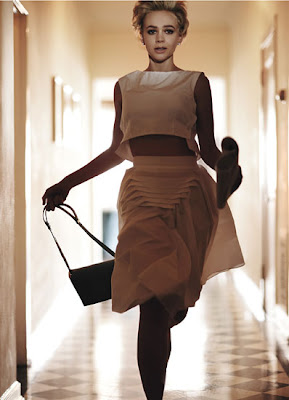 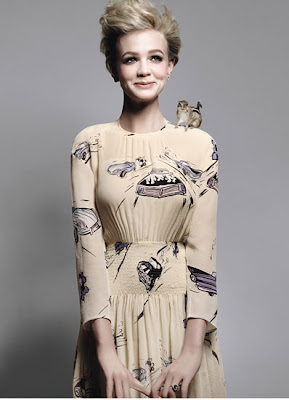 I am loving these photos of actress Carey Mulligan in the latest issue of W Magazine, all in service of promoting her new movie Shame. Carey has such an expressive face and I love the clothing selection and the retro styling, which seems to suit Carey's off-duty style too. I'm still crushing hard on those hot rod print dresses from Prada.
Carey's been in Sydney for the last few months shooting The Great Gatsby. You can throw rocks at me if you like but I'm not a big Baz Luhrmann fan. It's safe to say that I'm nervous. Having said that his wife Catherine Martin gives great costume; check out the blog A Wild Tea Party for a sneak peek at some of the duds on the forthcoming flick. 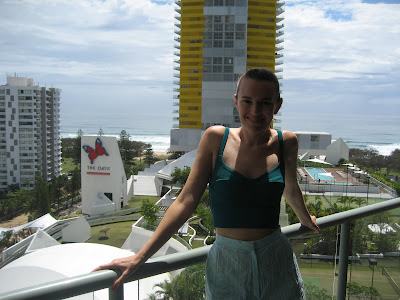 I want to apologise for my lax blogging of late. Work has been almost non-stop and when it finally did stop I left rainy Sydney again for a weekend away with my oldest friend Rebecca. Our destination: the occasionally rainy but sometimes sunny too Gold Coast. This is me on the balcony of our hotel wearing a bustier top from Sportsgirl and vintage shorts from Grandma Takes a Trip. Now that I've had my fill of travel for 2011, regular blogging duties will resume shortly.
Posted by Louise at 9:34 PM 1 comment:

Labels: Shops, Vintage (other), What I Wore Today

Wishing Away the Rain 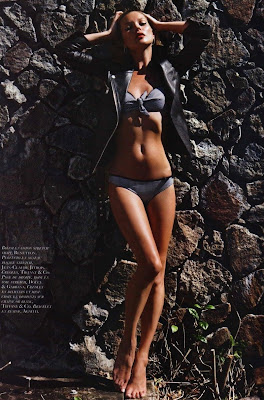 I've been neglecting the blog while I've been travelling the countryside for work and now my thoughts - especially in the face of unseasonal cold weather and bucketing rain - are turning to holidays. Next weekend is a girls only mini break on the Gold Coast and next month is a week in my favourite spot in Far North QLD. I'll be taking my own gingham bikini with the tie-front top, but I won't be looking anything like Kate Moss.
These pics are from a cover shoot from a couple of years ago for Paris Vogue. The photographer was Mario Sorrenti. 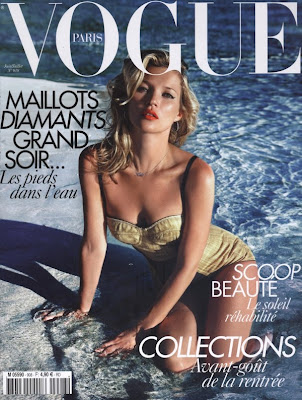 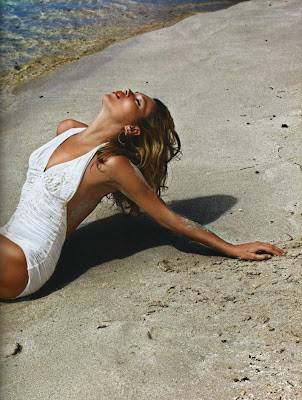 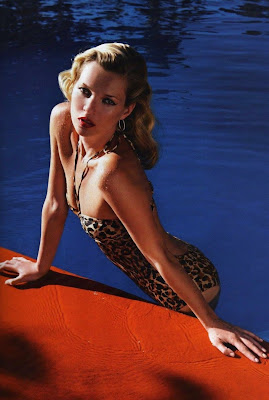 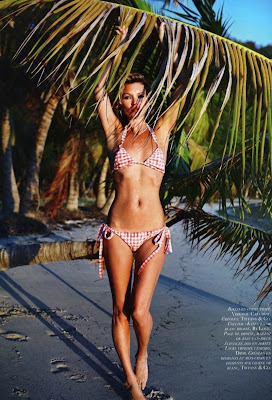 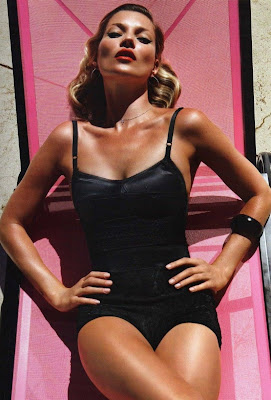 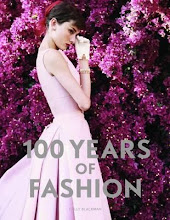 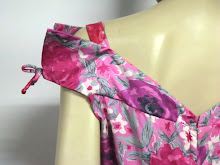